You are here: Home / Uncategorized / Re-Defining Family in Our Society

‘The bond that links your true family is not one of blood, but of respect and joy in each other’s life.’

Re-Defining Family in Our Society

Contrary to the stubborn beliefs of many ultra-conservatives in our country, the ‘ideal’ family of a mother and father (who were married in a church by a minister) and their perfectly clean, well-mannered 2.5 children may not ever have been typical.

Families come in all configurations.  Even during the 1800’s for example, it was not uncommon for families to be blended.  After all, if you didn’t succumb to influenza or the plague, you had a greater than average chance of being killed by your wagon tipping over or your ax missing the log and hitting your leg.  A woman’s husband getting killed left her little chance for survival on the plains.  She could become a schoolteacher or a prostitute, the latter eliminating any hope of raising her own children.  So, these people often cohabited, as much from necessity as the practical knowledge that going through life together was simply easier. Many did not legally marry; preachers were few and far between in rural areas. The orphanages routinely brought children whose parents had died to schools, hoping they would be adopted into existing families.

During the Great Depression, many families moved in together just to survive.  They made their way through life by sharing what they had – and got along because that is what it took.

Even in relatively recent times, it was not at all uncommon for many generations to live under the same roof.  When grandma got old and needed care, she had a ready-made staff of caretakers young and old, who made sure she felt loved and stayed safe.  In the 1970’s an upswing in communal living was popular as an antidote to the constraints of ‘establishment’ society, and ‘families’ were created.

Life is challenging.  We are all making our way, trying to create a life and be our authentic selves.  Why should we care if someone else’s idea of family is different from our own?  In looking at my own spectrum of friends (who I consider my extended family), I see married couples, unmarried couples with children, single parents, gay couples, platonic friends living together and raising children, and friends whose immediate family is their dog.  What do they all have in common?  They are all sincere, ethical, hard-working people who I can count on to support my choices, whatever they are. They share heartache and joy, meet challenges as a team, and rely on each other during crises.  They are families. 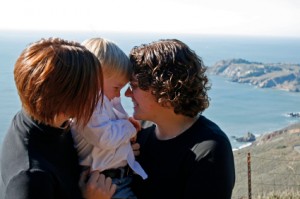 Many schools across the nation have incorporated a policy of tolerance and acceptance and make it a point to embrace all family structures and members.  Some have even begun holding ‘family day’ where all makes and models of families are invited to come and share their stories.  The goal is to teach kids that they should be accepting of other humans, whether or not they are similar or different.  Caught early enough, teachers report, these kids are objective, interested, and very tolerant of others.  They champion each other’s rights.  They aren’t afraid to admit they are vulnerable, and hold hands for comfort as they brave the new school year.

Yet in spite of the real facts – that ‘family’ in reality has likely never been as narrow as the conservative definition (except perhaps in the late 1950’s on Leave It To Beaver) there is an attempt by some to insist on a very rigid definition of family.

Tim Graham, of the ultra-conservative Media Research Center, is outraged that schools have an anti-bullying policy which includes gay kids.  According to him, we are living in a ‘hypersexualized’ society and this anti-bullying policy causes a terrible loss of innocence in our children.  I guess it’s okay with Mr. Graham if one of these innocent little darlings says something nasty and demeaning to another child as long as that child is gay.  Apparently, he’s all for an anti-bullying policy, as long as we are selective about who we don’t bully.  How he manages to extrapolate sex from anti-bullying is beyond comprehension, but I suspect he sees sex in everything, which says more about his own mind than others’.

How much better our world would be if Mr. Graham and his contemporaries could find it in their hearts to have respect and joy for others’ choices.  He would have more time to spend soul-searching his unhealthy obsession with sexuality.

Citizens for Choice embraces families of all types – regardless of sexual orientation.

For those in states where abortion access may be l

Swipe through to learn about what you may experien

Citizens for Choice is here to remind you that bre