You are here: Home / Uncategorized / How Men’s Attitudes About Sex, Affection and Their Bodies Affect Their Health

Men, affection, and sex. The subject could fill volumes, if only they would talk about it – openly and honestly.

They are taught from a very young age to pursue sexual encounters. Pre-adolescent boys are often exposed early to thinking of women as objects, even by well-meaning parents.  A father, mesmerized by a beer commercial featuring a nearly naked woman, can send a message – they are bodies, not people.  As always, a parent’s actions, rather than words, teach a child.

Adding to the onslaught of movies, television, and advertisements objectifying women, many men have a difficult time differentiating affection from sex.  Often parents are lavishly and openly affectionate with girls, and little boys are expected to stoically refrain from spontaneous hugging and kissing with their fathers.  In his article, ‘A Scarcity of Affection Among Men’( http://goodmenproject.com/ethics-values/j1b-a-scarcity-of-affection-among-men/), Jackson Bliss speaks of men learning to seek affection as sexual behavior, as opposed to social behavior. According to Bliss, it leaves a terrible wound in the male psyche – the remnants of a little boy who just needed to be hugged more often by the male role-models in his life. 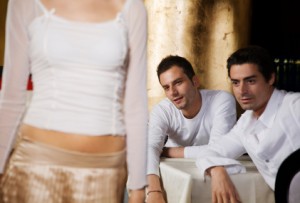 Gender stereotypes are alive and well, with women winning hands down in the affection department.  We openly hug our sisters, mothers, and friends.  We brush each other’s hair. We collaborate, share, laugh and cry together.  It’s harder for men to form close, meaningful friendships with other men that don’t involve some shared physical activity such as baseball, bowling, or car racing.

How does this affect men’s sexual health?  They typically aren’t as open or forthcoming when discussing their sexual health with their physician.  As a society, we appear to reinforce that behavior. ‘Well-Woman’ visits are now a part of the Affordable Health Care Act. What about ‘Well-Man’ care?  Why is it we encourage men by virtue of omission to only seek care when they are writhing on the floor in agony? Why aren’t physicians taught the huge differences in communication styles between men and women – and how to initiate a more effective conversation with their male patients?

Many young women have annual gynecological visits beginning when they are teens, which include a pelvic exam, pap test, vaccinations, and even sexual health counseling. This early interaction with a health care provider who encourages them to ask questions and bring up issues simply makes women more comfortable with the process in general. Young men are mostly treated with the attitude ‘if it ain’t broke, don’t fix it’, and never see a doctor for a sexual health issue unless they have a serious problem. In fact, fewer than 25% of boys age 15-19 receive any sexual health counseling, while the number for girls is 66%.

In a 2011 health survey for men conducted by Esquire Magazine, prostate exams caused men the most anxiety, despite the fact that cancer was the disease they most feared.  In spite of their fears, only 45% of men actually went to the doctor, compared to a majority of women. Men in this survey (which was, not surprisingly, anonymous) also admitted that talking to a doctor about their genitals, bowels, or mental health was embarrassing.

How do we help men become more comfortable both in seeking early medical care and talking about their bodies?  How do we help them learn that they, too, are responsible for their sexual health and that of their partners? That affection and sexual desire aren’t always the same emotion?

Start early.  If you have a son, encourage him to share his affection with the men in his life.  Fatherhood is shifting, with more men taking an active role in the raising of children.  Talk with your spouse about the mental and physical health benefits of showing affection.  Support organizations such as Planned Parenthood and Citizens for Choice – The Clinic!  in their endeavor to provide reproductive health care and education to men and women equally. 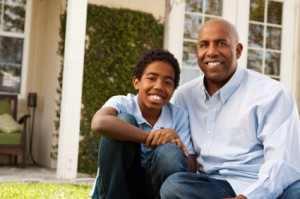 Best of all, keep the conversation going.  Share this blog with the men in your life.  Give them a hug and tell them the greatest gift they could give you is their long-term health.